Dumfries landfill to rebloom as The Rose

But Dumfries Mayor Derrick Wood can envision its future as a gaming resort.

“Believe in your vision and do everything in your power to make it a reality,” he said. “It’s time to create something new and exciting.”

Wood was among local officials who broke ground Tuesday on Colonial Downs Groups Inc.’s new gaming resort – The Rose – off Interstate 95 in Dumfries.

The company, which has run a Rosie’s Gaming Emporium in town since January 2021, announced in February plans for the $389 million gaming resort.  The Town Council rezoned 93.5 acres across 11 parcels at the Potomac Landfill in September to support the project. 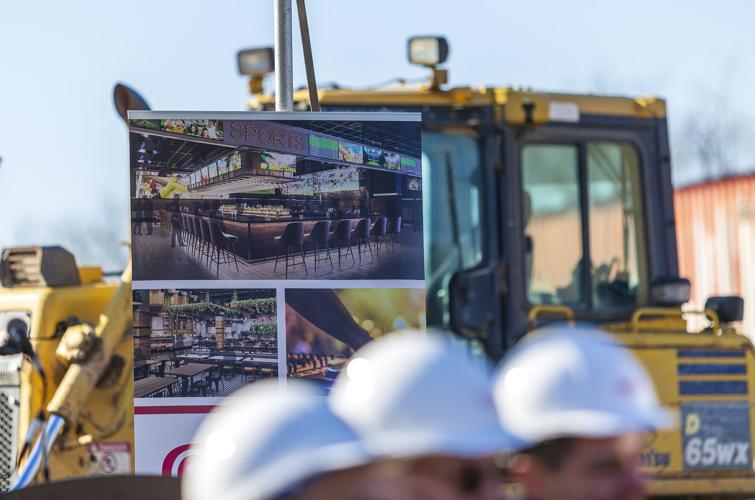 Artist renderings of The Rose displayed during the Jan. 11, 2022 groundbreaking. The Colonial Downs Group and Peninsula Pacific Entertainment are building the development at I-95 and Dumfries Ro

Construction begins for The Rose gaming resort in Dumfries, a $400 million complex to open late in 2023

Dumfries Mayor Derrick Wood speaks at the groundbreaking for the Rose on Jan. 11, 2022. The complex will include 80 acres of open public space with hiking and fitness trails, historical preservation sites, sport areas, playgrounds and a dog park.

State Sen. Scott Surovell, a Democrat whose 36th District covers parts of Prince William, Fairfax and Stafford counties, said the resort will bring a lot of opportunity for the Town of Dumfries
Bret Stevens, chairman and CEO of Peninsula Pacific Entertainment, said he was “committed to Dumfries and Prince William County,” at the Jan. 11, 2022 groundbreaking for The Rose gaming resort, its seventh Virginia property. The Rose said the average salary for the 600 staffers would be $47,000, and no less than $15 an hour.

Colonial Downs also said the project will have 79 acres of public recreation space, which could include sports fields and an outdoor amphitheater. The open space will be created through community input, and Colonial Downs will maintain it for 10 years before giving it to the town.

The landfill is at the southeast corner of the I-95 and Route 234 interchange. In February 2021, the landfill announced it had an option agreement to sell 100 acres to Colonial Downs for the project.

The proposal for the facility came after the Virginia General Assembly passed legislation that allows Colonial Downs to have up to 1,800 historic horse racing machines at its Dumfries location. The Rosie’s site that opened in January has 150 machines.

State Sen. Scott Surovell, whose current 36th District includes Dumfries, said that when he walks near his home in Mount Vernon he can see the MGM National Harbor Casino across the Potomac River. He said he’s always irked by the potential lost revenue for Virginia.

“This creates an opportunity for Virginia money to stay in Virginia and go to Dumfries,” he said.

Wood said the existing Rosie’s has been “transformational” for the town by boosting revenue, creating jobs and spurring neighboring economic development. He said with revenue from the emporium, the town has increased support for its employees.

Colonial Downs has said the new resort will create 1,490 jobs and provide $10.9 million in annual tax revenue to the town, more than doubling the town’s budget. The town spending plan for fiscal 2022, which started July 1, was $5.8 million.

“This is just the beginning of transformative change that will spread across Prince William County,” said Ann Wheeler, chair of the Board of County Supervisors.

As part of the project, Colonial Downs will construct traffic improvements before it receives a certificate of occupancy. Those improvements include intersection work at U.S. 1 and Route 234 and a traffic signal at the intersection of Colonial and Main streets.

The company wants to have the first phase of the project open in 2023.

“Lessons you won’t Learn in School” with Derrick Wood

STAY in the KNOW

WHETHER ITS NEWS, CAMPAIGN EVENTS, OR COMMUNITY ENGAGEMENT OPPORTUNITIES, STAY IN THE KNOW WITH OUR NEWSLETTER!

BUILT WITH LOVE BY DS DIGITAL